I used to soak in the hot tub at my gym after a workout and shower. But then two things happened: I noticed that my new bathing suits started to fade. Also, I got increasingly itchy when I got out of the hot tub. 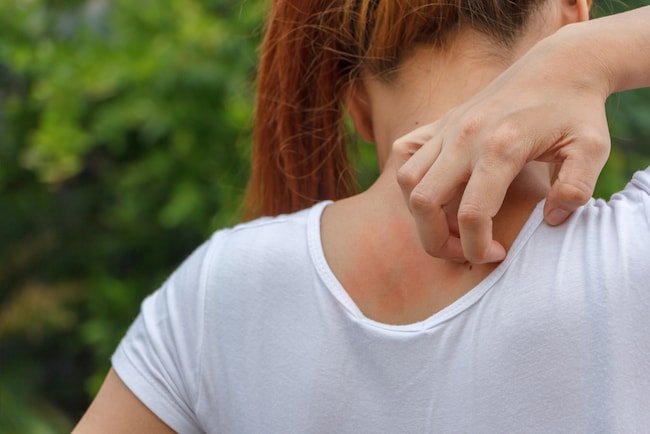 The targeted massage of a jacuzzi jet causes blood to rush to a muscle. Some people experience itching. However, if the sensation persists after exiting the jacuzzi, or a rash starts a few days after a soak, the problem could be caused by bacteria or a chemical imbalance in the jacuzzi jets or other parts of the jacuzzi.

In this post, we’ll look at chemical and bacterial problems that can cause itchiness and rashes—symptoms that can appear immediately or several days after jacuzzi use. Then we’ll explore solutions so that you can enjoy a soak in the jacuzzi without needing to worry that your skin could get irritated.

So Why Do Jacuzzi Jets Make You Itch? 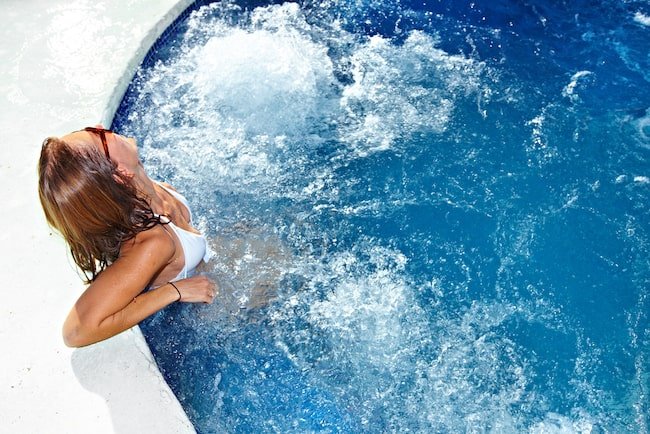 When the jacuzzi jets send a stream of forceful water onto a particular muscle, blood rushes to it and you can feel immediately itchy. That sensation, however, usually subsides shortly after you move the jet to another location on your body.

If you remain itchy after you get out of the hot tub, or begin to feel itchy or see a rash up to a few days after your soak, you could be experiencing “hot tub rash.” In medical literature, it’s called Pseudomonas folliculitis. This problem can occur because bacteria has grown on the jacuzzi jets, or because the chemical balance in the hot tub is not right.

Let’s face it (even though we’d rather not)—when we sit in a hot tub with our friends, we are pooling our human debris. And that’s putting it nicely. Our dead skin cells fall away from our bodies and intermingle. So does our perspiration.

And I seriously hate to report this, so skip the next paragraphs if you’re squeamish, but we’re also combining our bodily fluids—especially if we don’t shower before soaking together.

The reason gyms and spas make you shower before using the jacuzzi is that they know humans tend to have little bits of pee and poop stuck to their privates, especially in countries that use toilets without bidets. (If you want to get truly clean down yonder, definitely consider a bidet attachment. Read about my favorite one here.)

In any case, these bits of human bio-debris can contaminate our hot tub water and cause a biofilm to form along the top of the tub. They can also lead to bacterial growth on hot tub jets, as well as the drain and on other hot tub parts.

While chemicals will work to kill the bacteria, the less debris in the hot tub the better. If there is a larger concentration of contaminants in the water, the disinfecting chemicals will wear out more quickly.

Chemical Imbalances in the Jacuzzi Can Cause Itching

Two common chemicals in jacuzzi (aka “spa” or “hot tub”) sanitizers are chlorine and bromine. When the levels of these chemicals are not optimized, bathers can experience skin irritation, a bumpy rash, and splotchy, itchy skin. Understanding how to balance these chemicals is essential to prevent itching from the jacuzzi.

Why do we chlorinate water?

Acording to the American Chemistry Council:

“Routine chlorination kills harmful microorganisms that can cause health-related problems, such as gastroenteritis, Legionnaires disease, ear infections and athlete’s foot.”

What is the ideal amount of chlorine in a jacuzzi?

According to the US Centers for Disease Control (CDC), jacuzzis should maintain a Free Available Chlorine level of 3-5 ppm (parts per million).

What are the different ways to measure chlorine?

When you put chlorine into your jacuzzi, it doesn’t immediately kill germs. That takes a few minutes. The chlorine that has not yet reacted with bacteria or other jacuzzi contaminants is called Free Available Chlorine (FCL).

On the other hand, the chlorine that has already combined with ammonia in the form of perspiration and urine from bathers is called chloramine.

If you add both the FCL and the chloramine concentration, you’ll get the “total chlorine” level.

Jacuzzi owners or operators should test the levels of FCL at least twice per day, and have a device that will regularly add more FCL to the hot tub as needed.

It’s important to check all the levels, and not just the total chlorine level.

What happens if the chlorine level isn’t right?

The incorrect amount of chlorine can not only fade a bathing suit (like it did mine!), but it can also cause skin sensitivity. Too many chloramines can cause skin irritation.

A strong chemical smell of chlorine doesn’t necessarily mean there’s too much in your hot tub—what you are smelling is the chloramine, or the chlorine byproduct from chlorine that has already been used up. This is often a sign that you actually need to add more Free Available Chlorine.

While chlorine tends to break down more quickly and at higher temperatures, bromine is a disinfecting chemical that is more stable in a hot jacuzzi. Many chemical hot tub disinfectants contain both bromine and chlorine.

Why is bromine used in jacuzzi sanitizers?

What is the right amount of bromine to use?

To keep a jacuzzi clean of contaminants, it’s important to maintain exactly the right amount of bromine: 3-5 (ppm) parts per million at all times.

What are the different ways to measure bromine?

When bromine reacts with ammonia in water, it loses the capacity to decontaminate. The inactive waste from bromine is called bromamine. It’s important to measure active and available bromine in your jacuzzi water.

What happens if the bromine level isn’t right?

If there’s too little bromine in your jacuzzi water, it won’t decontaminate as well and could allow bacteria to grow. While bromamines cause skin irritation and itching, some people say it is not as extreme as the irritation caused by chloramines.

In addition to getting the balance of chemicals right, it’s critical to remove the waste from these chemicals (aka chloramines and bromamines) on a regular basis through filtration. Otherwise, these chemical byproducts will build up, increasing the likelihood that bathers will experience itchiness and hot tub rash. 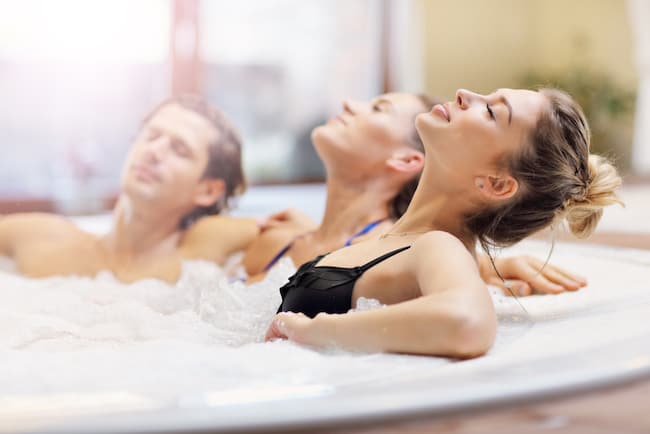 Now that you’re aware of what is making your skin itchy or break out after you use the jacuzzi, it’s time to explore how to remedy the problem. Here are 5 ways to stop itching and prevent “hot tub rash.”

Whether you use bromine or chlorine to clean your jacuzzi, you want to check levels of free available forms of these chemicals on a regular basis.

As discussed above, when the levels are too low, there may not be enough sanitizing chemicals to fight off bacteria and algae.

You’ll want to use testing strips twice a day when the jacuzzi is in use. Or even better, try a liquid testing kit. Then immediately adjust the amount of sanitizing chemicals according to your findings.

Filters collect large particles of contaminants. As the filter becomes dirtier, the pumps need to work harder to circulate the water through the jacuzzi filters. According to Darla Goeres:

“Since pumps force water through the filter, filter pressure increases as the cartridge gets dirty. Manufacturers typically recommend that filters be cleaned when pressure increases to a predetermined amount (typically 10 psi), and that cartridges be replaced annually.”

For this reason, keep careful track of the filter pressure. Check your manufacturer’s guidelines about when to replace filters and stick to the schedule.

3. Shower Off Before and After Jacuzzi Use

Before using the jacuzzi, all bathers should take off their clothes or bathing suits and shower with soap. Then make sure to fully wash off the soap before entering the spa.

If all bathers shower immediately before getting into the jacuzzi, you’ll greatly reduce the amount of biofilm in the hot tub. And making sure to wash off any soap will ensure that the soap doesn’t become just another contaminant in the jacuzzi stew.

Equally important, you’ll want to shower off with soap after using the hot tub. Bromine is more difficult to wash off the skin than chlorine, so if you’re using bromine give yourself a good scrub. Use a gentle soap.

It’s not uncommon for people who get jacuzzi rash to get the redness in the exact shape of their bathing suits. (It’s like a reverse suntan.) The reason is because the bathing suit traps the water beneath it, and along with the water, it traps the cleaning chemicals.

So take off your bathing suit as soon as you get out of the hot tub. Then wash it with a gentle cleanser, not just to save your suit but also to protect your skin the next time you wear it. It’s not good enough to rinse your bathing suit while it’s still on your body.

Chlorine-only and bromine-only aren’t the only types of cleaning chemicals available. You can find solutions that use a much lower concentration of these chemicals along with minerals, such as silver and copper.

You can also find a sanitizing solutions that uses biguanide and doesn’t contain any bromine or chlorine. However, it’s more expensive. Check with your manufacturer to be sure it’s alright to use in your jacuzzi. Look for the brand name BaquaSpa.

Why the Jacuzzi Makes You Itch 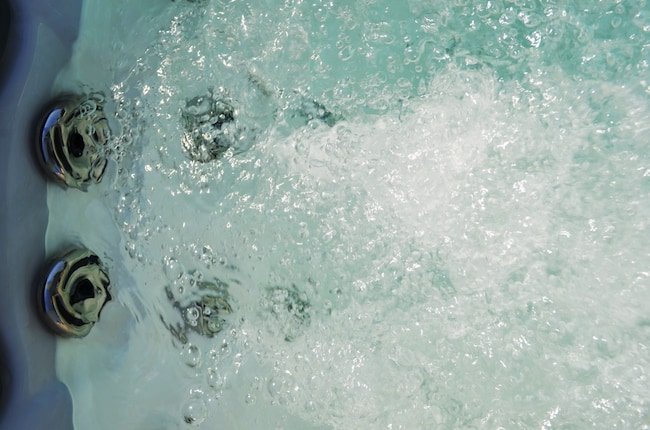 So now you know that the rush of blood to a muscle getting massaged by the water from a jacuzzi jet could make you itch. But so could bacteria growing on the jacuzzi jet—or on another part of your spa. And the itching is also likely to be caused by an imbalance in the cleaning chemicals.

Now that you’re equipped with tips to stop the itching, let’s talk about the next important thing: Enjoying some serenity in your spa! Check out the 10 Coolest Gifts for Hot Tub Owners. Get yourself a treat to take your jacuzzi bliss to the next level.

link to Single or Double Ended Bath: What’s Right for You?

One of the first questions you’ll need to answer when looking for a tub is "Do I want a single-ended bath or a double-ended bath?" Wait a minute, though! Don’t all bathtubs have two...

Continue Reading
link to Shh! Here's How to Fill a Bathtub Quietly

When my son was a baby, I’d try to bathe during his nap but the sound of the tub filling would often wake him. Well, necessity is definitely the mother of invention. So this mother...