I visited Japan a few years ago, where every single toilet I encountered had a bidet. I found myself feeling a lot cleaner so recently, I decided to try a bidet attachment at my home in Texas.

Bidets spray water up to clean the user’s bottom. Some bidets come with dryers and other high-end features, such as remote control, adjustable nozzle, a variety of spray types, deodorizer and temperature control.

While the bidet can come built into the toilet, a bidet attachment can be added onto an existing toilet in about an hour or less. For example, I got the TUSHY Spa bidet attachment, which comes with temperature control, adjustable pressure, a self-cleaning nozzle and a warm water connection. It cost me $119.

A Bidet Is Worth It—Economically, Environmentally and Medically

A bidet attachment is definitely worth it in terms of money saved on toilet paper, reduced environmental impact and health benefits. Let’s break this down:

Economic Benefits of a Bidet

When you use a bidet, you don’t need toilet paper—or at least you won’t need as much. Some bidets come with an air dryer, but even if yours doesn’t, you have a few options: You can wait a minute after the water finishes cleaning you and then air dry naturally. You could pat yourself dry with a towel like you do when you get out of the shower. Or, you can use just a few squares of toilet paper.

According to Toilet Paper History:

“Currently, the United States spends more than $6 billion a year on toilet tissue—more than any other nation in the world. Americans, on average, use 57 squares a day and 50 lbs. a year.”

An average family of four spends about $150 on toilet paper per year. A TUSHY bidet costs around $100 (exact price depends on the particular model you choose). This means in one year, you’ve easily earned back the cost of the bidet.

Environmental Benefits of a Bidet

According to Justin Thomas at Treehugger.com:

Keep in mind, it takes 37 gallons of water to produce just one roll of toilet paper, while the TUSHY uses one pint of water to clean you each time.

Not only that, every 1 roll of toilet paper requires 1.5 pounds of wood to produce. Most of the wood comes from a forest in Canada. That’s a lot of unnecessary deforestation to clean our bums!

Clearly, the bidet is the eco-friendly bathroom choice.

Health Benefits of a Bidet

Many women who have vulvar and vaginal sensitivities claim the bidet is far more soothing to use than toilet paper, which can be irritating. If you have Irritable Bowel Syndrome or Crohn’s Disease, you might need to use toilet paper more frequently and cause serious irritation as well. The bidet can get you clean without any wiping.

Similarly, women who are pregnant and have trouble reaching their private parts can be assisted by a bidet. The same goes for seniors or anyone with mobility issues. Further, a study found that people with hemorrhoids and urogenital problems prefer to use a bidet.

Why the TUSHY Bidet Attachment is Worth It

It’s possible to purchase a bidet toilet or even a bidet attachment that costs up to $2,500. But I didn’t need bells and whistles. My goal was just to have an eco-friendly bathroom and feel much cleaner.

With these goals, the TUSHY bidet attachment is more than worth it for me.

There are two basic models: The TUSHY Classic and The TUSHY Spa. Both models fit onto your existing toilet seat and have a nice looking control panel that allows you to adjust the pressure and control the nozzle.

The TUSHY Classic only hooks up to the toilet, so it provides water at the temperature of the water running into the toilet. You can get it for $89.

The main difference between the two models is that the TUSHY Spa has a warm water attachment that will hook up to the warm water under your bathroom sink. As a result, you can control the temperature of the spray.

Why I Love My Bidet 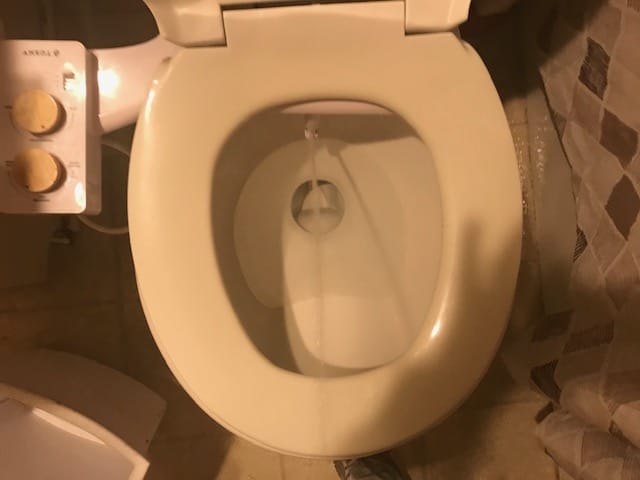 The main reason I love the bidet and it’s worth it to me is that I just feel super clean. It’s like a little bath for my bum.

Before visiting Japan, I had never much thought about why most of the developing world doesn’t have the same toilet paper obsession as we do in the US.

As soon as I tried a bidet, though, it suddenly dawned on me that wiping with toilet paper is kind of…well, gross! I mean, could you really be getting all the way clean down there? With the TUSHY, I know I am!

It also looks pretty on the toilet and makes me feel like I’m back in Japan, where they revere the water. The Japanese have incorporated cleanliness into everything they do, including the Japanese baths. (Did you know when taking a bath in Japan you wash yourself before you soak? If the bidet is clean enough for the Japanese, it’s good enough for me!

According to the TUSHY company, it only takes 10 minutes to install the bidet onto your toilet. I would say that depends on a few things: 1) How old are your pipes, and 2) Are you handy?

My house was built in the 1970s and our pipes date back to then. They are kind of funky. And no, I’m not really handy. That said, it took me two tries to install the TUSHY: one by myself and one with the husband. Even with the extra help, it took us 70 minutes to get it in right.

While the TUSHY Classic is easier to install, I wanted the connection to the warm water. For this, I realized that I needed to run a tube from the toilet to the sink. While the sink in my downstairs bathroom is directly across from the toilet, I wasn’t sure how to lay the tubing so that it wouldn’t show. (I’m sure a plumber could figure it out.)

So instead, I chose to install the TUSHY in our upstairs bathroom, where the toilet is adjacent to the sink. We drilled a hole and ran the tube from the TUSHY bidet attachment to the warm water valve under the sink.

I have to say, I’ve read a lot of other reviews online, and most people seem able to do the installation in about 30 minutes. So installation is not my strength. Oh well.

One more thing: Make sure you have a standard toilet. If you have some weird shape—extra long, extra deep—I’m not sure if the TUSHY would fit correctly.

Why Do Americans Use Toilet Paper Anyway?

You might think Adam and Eve existed with rolls of Charmin alongside them, but you’d be wrong. In fact, since ancient days, people have used whatever was convenient to clean themselves after going poo. Sometimes they used shells, clay, coconuts or newspapers.

Like everything else in the US, the acceptance of toilet paper resulted from a successful marketing campaign. A version was first introduced in 1857 but the product wasn’t accepted until the end of the 19th Century when flush toilets were installed in homes. The turning point came in 1958 with the advent of the Charmin brand that was marketed with an illustration of a beautiful woman. The product took off.

The TUSHY Can Change Your Life!

Once you get the TUSHY installed, prepare to feel exuberant. It’s like you’ve discovered a whole new way of being in the world, except no one but you and your family or housemates know.

You’ve just got that extra giddy step. You’ve just got a new secret that is powering you through the days. You might even feel a bit cocky, more than a tad extra glam!

Go forth with your new power and enjoy the rush of moving through life for the very first time with a truly clean tush!