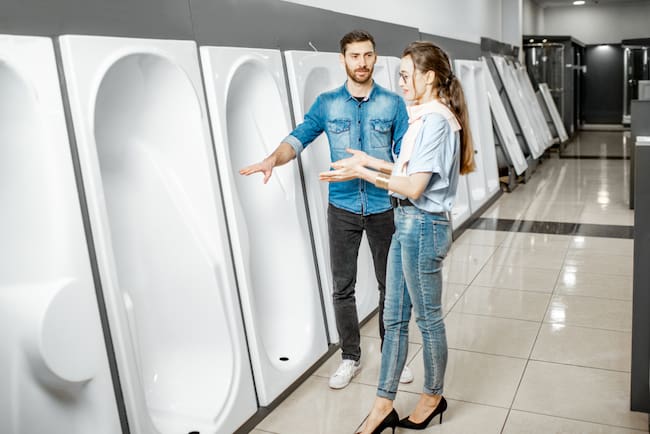 One of the first questions you’ll need to answer when looking for a tub is “Do I want a single-ended bath or a double-ended bath?” Wait a minute, though! Don’t all bathtubs have two ends?

A single-ended bath has a tub spout, faucets and drains (waste) at one end of the bathtub. The interior tub shell on the opposite end slopes for back support. A double-ended bath, however, has faucets and drain plus overflow in the center of the tub. The interior tub shell on both ends of the double-ended tub slopes for back support.

Let’s take a look at the differences between single-ended and double-ended baths so that you can decide which works best for you.

Because single- ended tubs have a drain and overflow at one end, and only one interior end is sloped, the single-ended bath is made for one bather. Here are some other characteristics of the single-ended tub:

Single ended tubs are most often laid into an existing structure in the bathroom.  The alcove tub is a common type of single-ended inset tub; it’s made to fit snugly between two or three existing bathroom walls.

Single-ended tubs are usually rectangular shaped. The most common materials for single-ended bathtubs are fiberglass and the slightly more expensive acrylic. Both of these tub materials are lightweight and easy to clean, although fiberglass can be susceptible to mold and the finish can fade over time. (For much more about the pros and cons of these materials, read Looking for the Best Bathtub Material? Here’s Help.)

The inset alcove single-ended tub is great for small bathrooms. And while it’s possible to get an extra-deep single-ended tub, it’s common for these tubs to include a showerhead affixed to the wall at the same end as the drain (waste) and tub spout.

Because of the interior design of the bathtub shell, the shower taker can get right under the showerhead, while the bath taker can relax against the slope of the opposite interior side.

Another benefit of the single ended tub is that it’s generally more affordable than larger, double-ended bathtubs. And it’s also possible to find a single-ended whirlpool or air tub.

Freestanding tubs are usually not placed flush against the bathroom walls, but rather occupy a stately place in the center of the bathroom. While it’s most common for freestanding bathtubs to be double ended, this is not always the case.

Consider many models of the vintage porcelain-enameled clawfoot bathtub, which are single-ended baths yet they are freestanding. The “single-slippered clawfoot” tub has one end raised for a comfortable backrest, while the faucet and drain are located at the foot of the tub. And with the roll-top clawfoot, neither end is raised. However, one end of the tub is rounded and the other is squared off. The drain and faucet are located at the squared end. (For much more about clawfoot tubs read Clawfoot Tubs: Ultimate Buying Guide.)

Baths that are double-ended have the drain and faucet in the center. The interior shell of both tub ends usually slope so that two bathers can fit comfortably with their heads opposite from one another. Here are some other qualities of double-ended tubs:

Sometimes double-ended tubs are placed near a wall, but often they won’t usually rest flush to the wall because of their common oval shape. (Find out everything you could possibly want to know about these bathtubs in my post Freestanding Tubs: The Ultimate Buying Guide.)

Double-ended bathtubs have a luxurious aesthetic and come in a wider range of materials including copper and stone. They are usually oval-shaped but sometimes rectangular like the one pictured above.

Double-ended tubs are not only elegant to look at. They are often longer and deeper than single-ended tubs. For this reason, while the tub fits two, an extra tall or large person will enjoy getting into one of these tubs on their own. Also, parents report it’s easier to bathe children in a tub with a center-placed faucet. And if you’re looking for a whirlpool or air tub, you should find plenty of double-ended bathtub options.

Not only are double-ended tubs often larger than single-ended baths, but they’re also frequently more expensive. And depending on your taste, the bathtub faucets for a double-ended tub can often cost more than the bathtub—especially if you want a freestanding filler that is a showpiece unto itself. And with the larger capacity of the tub, you’ll use more water which has costs for your pocketbook as well as for the environment.

Also, these tubs are typically not used with a showerhead that’s affixed to the wall. Instead, the double-ended tub is mostly used for soaking. And while it’s possible to get a faucet with a hand-held shower head or wand, you do risk getting water everywhere.

The question of whether to get a single or double-ended bath is one of the first you should answer in your journey to select the right tub for you and your bathroom. For more help getting your dream tub within budget, be sure to read my post 8 Steps for How to Choose a Bathtub. In this post, I’ll help you figure out the right tub type and bathtub material, hardware and much more.

And if you’re searching for a bathtub as part of a bathroom remodel, be sure to enter your name and email below. I’ll send you designer bathroom renovation hacks that can save you thousands.

If your bathroom is looking a little old or outdated, then new tiles will make a world of difference. You're probably already dancing a happy dance just thinking about how much better your...

Continue Reading
link to Steel vs. Acrylic Bathtub: Which Is Right for You?

If you’re like me, taking a nightly bath is a ritual! And when bathing is such a big part of your life, you want to make sure that the tub you choose for your bathroom is the perfect one...