Thanks to the Internet of Things (IoT), our homes are becoming increasingly high-tech and connected these days. But with all those technological advancements, do we need high-tech smart showers as well?

Smart showers offer more features than conventional showers. Aside from convenience, they reduce water usage and can make showers safer for children and seniors. You can choose to build a smart shower system from scratch or convert your existing shower by purchasing smart shower upgrades.

For other smart bathroom ideas that can transform your life, don’t miss my post on the 9 Coolest Smart Bathroom Ideas of the Year.

Should You Get a Smart Shower?

Before you decide if you should get a smart shower, let’s make sure you understand what a smart shower is, how one works, the difference between digital and smart showers, how much they cost, and the best models available.

What Is a Smart Shower?

A smart shower has built-in technology for greater control, connectivity, and automation.

For starters, smart showers have control panels that allow you to preset everything about your shower, like the precise water temperature and water flow rate. Once in place, you only have to push a button to reuse the same presets each time you take a shower.

By extension, everyone in your home can also have a preset of their own. So, whether they prefer a hot shower with lots of water or a colder one that saves water, their customized shower experience is just a button-push away.

Connectivity and the Internet of Things (IoT)

Of course, a smart shower wouldn’t be ‘smart’ if it didn’t connect to the internet. But why would you want a shower that can connect to your home WiFi?

Well, it allows you to interact with the shower online or through a smartphone app. So, for example, you can track your water usage and use that information to be more environmentally conscious. Or you can set music to stream through a smart shower with a built-in Bluetooth speaker.

As with other smart and connected devices, your smart shower may have automatic self-cleaning features that take all the fuss out of maintenance for you.

How Does A Smart Shower Work?

As complex as a smart shower might seem, its functions are pretty straightforward. That’s especially true when you understand that it has three main components:

The arrangement of these parts can differ between brands. For example, the control panel, controller, and transmitter could all be part of a single unit. Other brands separate them into three stand-alone components.

Let’s look at what each part is designed to do.

The control panel or interface is the point where you interact with your smart shower system.

With conventional showers, you’d turn knobs or move levers to adjust the water temperature. On a smart shower, however, you’ll use a control panel that’s designed to be intuitive and straightforward.

So, rather than waste time trying to adjust the water flow and temperature, all you have to do is choose your preferences on the control panel.

Naturally, the control panel is waterproof so you don’t have to worry about touching it with wet fingers. Once you’ve input your settings, the control panel will then communicate with the rest of the system to give you the smart shower experience you want.

The controller box is connected directly to your hot and cold water lines, as well as the power supply needed for it to function correctly. Inside, there are valves and electronic components that control the flow of water.

The controller box reacts based on the settings that you input to the control panel. For instance, once you’ve set your desired water temperature and flow, the controlled box will adjust the valves to ensure that you get the customized shower you desire.

A smart shower system also has a wireless transmitter attached to it. This transmitter allows the controller box to communicate with your smartphone app through your home WiFi network. 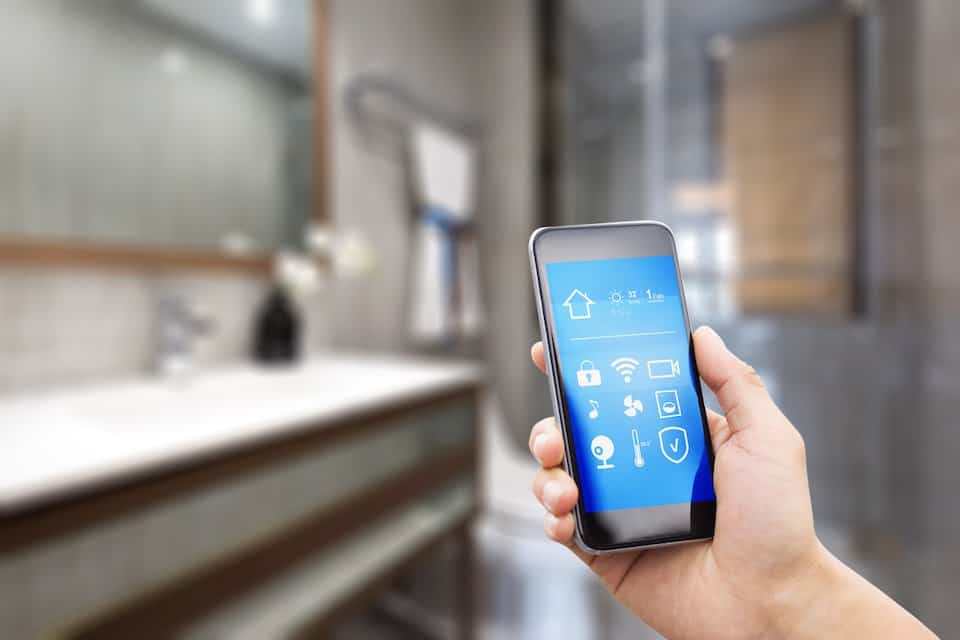 Many manufacturers might use the terms ‘smart’ and ‘digital’ interchangeably, even though technically speaking, they mean two different types of shower technologies.

As the name suggests, a digital shower comes with a built-in digital thermostat. That thermostat is connected to a control panel or remote in the shower, where you can set your desired temperature and water flow precisely as you like.

However, while a digital shower only gives you control over temperature and flow rate, a smart shower has many more programmable features.

Pros and Cons of a Smart Shower

Before you decide if you should get a smart shower, consider some of the biggest advantages and disadvantages:

Pros of a Smart Shower

Cons of a Smart Shower

How Much Do Smart Showers Cost?

Assuming you’re buying a new and complete shower set, you can expect to pay anywhere from $1,200 to $25,000 to purchase and have a smart shower system installed in your home. That price range is pretty broad, so let’s break it down a bit further:

If those numbers seem a little too high for your liking, don’t worry. Here’s the thing about smart showers: you don’t have to replace all shower parts just to make it a smart shower.

Instead of starting from scratch, you can buy specific smart components (like the smart shower controller or a smart showerhead) and turn your regular shower at home into a smart one that way.

The market for smart showers is growing very quickly. Still, some names still lead the pack despite all the new manufacturers and products becoming available.

In this section, we will show you our top 3 picks for the best smart showers. As you’ll see from this list, there are several ways to turn your existing shower into a smart shower.

This product is the perfect solution if you want to experiment with smart shower technology without investing too heavily in it, since all you’re doing is upgrading your rain showerhead.

It comes with a remote control that you can mount on your shower wall and allows you to switch between three of GROHE’s shower rains, namely ActiveRain, PureRain, and Combination Spray.

There are many things to love about this smart shower. First, the design of the controller is straightforward and sleek. So, no matter what your bathroom decor is like, the controller won’t look out of place.

Plus, this product comes with all the control options you’d want. You can use your voice, the smartphone app, or the buttons on the controller. Better yet, you can also connect it with a home assistant like Alexa as part of your overall smart home setup.

The KOHLER DTV+ Digital Shower Interface enables you to control your bathroom’s shower outlets, audio outputs, steam, and even lighting from this interface. You can adjust the entire environment of your shower and bathroom as a whole, all while taking a shower.

So Should You Get a Smart Shower?

Are you still wondering, “Should I get a smart shower?” Well, iiof you’re doing a bathroom remodel now is a great time to invest in smart bathroom technology. Though you might invest more upfront, you can save costs by monitoring the length of your showers and always keeping the temperature at a pre-set level.

While you’re at it, you might want to consider other smart bathroom ideas like touchless faucets, steam-free bathroom mirrors, smart toilets, smart bathroom lights and smart bathroom fans. Check out my posts on all of these so that you can get the best products for your bathroom and your lifestyle.

And if singing in your smart shower is important to you, then consider getting an LED color-changing shower head and a Bluetooth bathroom mirror. With these smart additions, you’ll easily turn shower time into party time!

link to THIS Is How High Your Bathroom Vanity Should Be

If you’re in the process of remodeling a master or guest bathroom, you’ve probably considered switching out the vanity. A new vanity can completely change the look and feel of a...

Not sure how large your bathroom vanity should be? Struggling to find a mirror that matches it perfectly? It may not seem like a big deal but getting the right proportions will elevate your...