A friend of mine recently snapped a pic of her husband’s bath setup just before he got in: candlelight, music, jacuzzi jets. But when I interviewed this man, who I’ll call Secret Bath Lover, he told me the only reason he takes a bath is to limber up for the Ironman competition.

After informally surveying several middle-aged men who take baths, I’ve found that men seem unable to enjoy a bath for the sole purpose of relaxation. Instead, the men I spoke to had utilitarian explanations for why they take baths. Their reasons range from cold water acclimation to hoping for sex in the tub.

In this post, I expose the true stories of men who take baths and their bathing practices. In exchange for sharing their honest habits, and to protect their collective manhood, I’ve promised to keep my sources anonymous.

While it was easy to find men who take baths, it was nearly impossible to find any—except one adorable 15 year old!—who admitted to a regular bathing practice. Of the four men I interviewed, I heard nothing of bath bombs or Epsom salts or bubbles from any of them. However, there was plenty of complaining about what they wanted from a bath versus what they actually got.

One businessman, who I’ll call Action Man, told me, “If you can get the wife in the tub and get some action, that’s obviously a draw. But I think a bath means something very different for a woman.”

Action Man isn’t alone. Secret Bath Lover, who recently bought a $10k jacuzzi set up for the master bathroom, said he regrets the tub he got only fits one. “It’s not that fun to take a hot tub by myself. If I were to do it again, I’d get a hot tub that can fit other people in it,” he said. “A communal bath experience would be better.”

Plus, Secret Bath Lover complained, it’s too hard to hear music over the jets.

Another man complained that he couldn’t use his phone in the tub, so the whole bathing experience was, therefore, not efficient.

While a few of the men I interviewed claim to get a bit relaxed in the tub, none of them soak solely to find bathtub bliss.

Instead, they all tried to accomplish something else—something supposedly more important—at the same time. Their “goals” for bathing range from “warming up when I’m chilled to the bone” to “increasing my range of motion.” Yoga Man told me that he tries to do a yoga class while in the tub.

I’ll let you decide which reason is #1 and which is #10. I’m confident you can figure it out.

In any case, some of my interview subjects said they use bath time to catch up on email, while others watch a movie they’re longing to see. Action Man, a father of four, said the bathtub is his hideout from the tumult of his house. “If I’m into a good book and I need to escape the chaos of the family and the dogs, I’ll get in there and read,” he said.

The teen, who I call Teen Tubber, told me he uses bathtime for some deep thinking. “I think about important stuff like what job am I gonna go for, any important school work, if I’m gonna make a financial purchase,” he explained. “It also helps me wind down after a busy week,” he adds.

All the grown men I interviewed said something about baths being inefficient. Action Man said, “It’s inefficient for a few reasons: It uses a lot of hot water which drives up the energy bills and it takes longer than showering.”

It sure must be hard to relax while you’re calculating the water bill at the same time.

Plus, my research into shower vs bath water usage shows this common misperception isn’t even necessarily true. Read my post Bath vs Shower: Which Uses More Water? You’ll learn to calculate your own bathing footprint.

Teen Tubber also told me he prefers a bath to a shower because it saves water. When probed for an explanation, he said, “I soak in the tub 2-3 hours. If I showered that long, I would waste much more water.”

“Two to three hours!” I exclaimed. “Doesn’t the water get cold?”

Teen Tubber explained that his bathtub has a very small leak so it’s necessary to add a bit more water every so often anyhow. But even including the topping off ritual, he’s quite certain a shower of the same length would be much worse for the environment.

Personally, I take a nightly bath to unwind from the day. That’s my only agenda. If anything gets in the way of my nightly ritual, I’m bound to be cranky and have trouble sleeping. I was wondering if I’d encounter any men who have a similar daily bath schedule.

Secret Bath Lover, who is a doctor, told me he bathes about once a week for 10-20 minutes. When I asked if it’s a regular night of the week he chooses, like every Wednesday or every Friday, he explained that the bath schedule doesn’t work that way. “If I come home one night and I’m really tired, I can either eat or take a bath. I’ll go for the bath just so I don’t eat.”

Action Man told me that taking baths is his winter sport because it’s the only way he can get warm. “I’ll go every night in the dead of winter. Then my season’s over and it’s back to showering.”

Do Men Who Take Baths Relax? 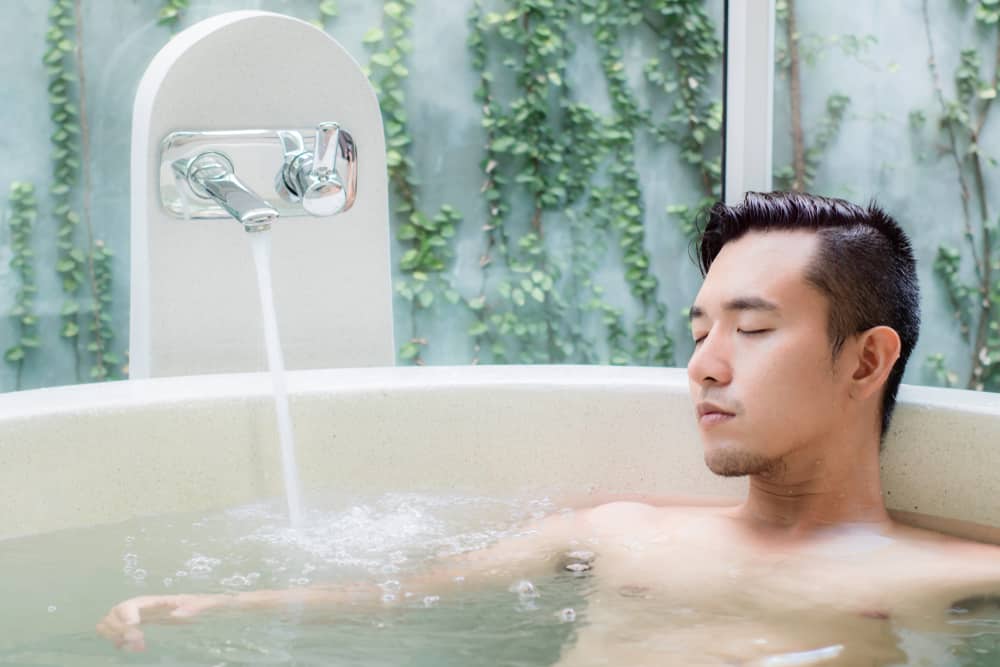 With a bit of probing, I discovered that all the men who take baths do enjoy the relaxation they get out of the experience. They are loath to admit it, though. It’s like the serenity of the bath is just something that happens by accident while they’re trying to accomplish their other important goal.

“When I take a bath, I do it at night because I know I’ll go to sleep quickly,” Yoga Man told me. “Otherwise, I don’t really have time,” he added.

In interviewing men who take baths, I realized that there is some societal taboo in the US that says “relaxation is for women.” Action Man told me, “Generally speaking, I don’t associate bathing with men.”

Huffington Post surveyed 1000 people and asked if they preferred baths to showers. Of the 485 men, only 9% took baths. Another 3% of male respondents said they weren’t sure which they preferred—baths or showers. However, I am 100% sure that those 3% are men who take baths in secret! (source)

Only Teen Tubber came right out with the truth: “I like a bath better. It’s way more relaxing.”

How to Take a Romantic Bath

Does your partner yearn to share a romantic bath with you but you don’t know where to start? Don’t worry. I’ve got you covered. Check out my Top 10 Romantic Bath Ideas here. Any one of them is sure to delight your significant other!

It’s sad that men feel they can’t take the time to simply relax in the tub. Or that unwinding is purely a feminine endeavor. If more men could fully own the bliss that is the bathtub, I have no doubt we’d be living in a more peaceful world. Life for all of us would feel more bubbly.

Inflatable hot tubs sound like a great idea, and perhaps given how cheap one is relative to a built-in hot tub, you might be too good to be true. What's the catch? The most noteworthy pros of...

The evolution of bathroom sinks from a simple washstand with a basin to contemporary designs featuring sensors has led to the conception of a myriad of styles, many of which have stood the test of...